When you're going into any new scenario it's difficult to have no level of expectations for what you believe it will be like. Whether it's something as simple as eating at a new restaurant or living in a new country, you don't know what it is truly like. You can read the menu a thousand times over but you'll never know what it's truly like until you taste the food. I think this is an appropriate analogy to use when describing my first week at work. I had read a great deal about the company; read dozens of their research reports, press releases, and various media coverage about them, but I wasn't able to actually understand what they were like as a company until I stepped foot into the office.

I woke up Monday morning an hour earlier than I had anticipated, but I was too anxious to go back to sleep. I had several reoccurring dreams in the weeks prior that I was horribly late to my first day of work and I was intent on not having those dreams become a reality. I could've gone back to sleep for a few more minutes but I didn't want to take the risk, so I decided to begin my day. I made myself breakfast, showered, threw on my suit and I made my way to the tube station. It's about an hour long commute in total for me but I don't mind the commute one bit. It's a nice smooth ride of around 45 minutes on the district line then followed by 15 minutes of walking(including walking to the station initially and then walking to my office once I'm off the train). I listened to the autobiography of Elon Musk on my way there on audible, and then I followed that up with some music once I was off the train. Musk is a really interesting figure who I look up to because he isn't afraid to think outlandishly and then act on his thoughts, which is one of the main reasons he has become incredibly successful. You can sit around and have brilliant thoughts all day long but until you manifest those thoughts into actions they're meaningless.

I hopped off the tube at Cannon Street station and began my walk towards the office for my first day of work, nervous as hell in all honesty. Not a bad kind of nervous, just a lingering sense of uncertainty that I wouldn't be able to shake until I entered into the office. I made my way out of the station and I strolled down the road, made a right turn and then I'm hit with a view of the Bank of England, an old school looking building with columns and all. The view is complemented with some skyscrapers in the background, giving you a view of old London along with new London. 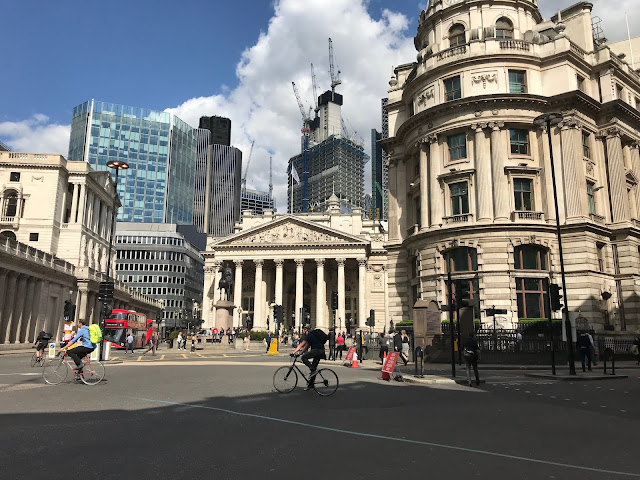 Seeing the institution that all modern day central banking is based upon while on your way to work is quite an incredible feeling; mainly because I'm an econ/history geek. The Bank of England has effectively paved the way for modern economics and central banking in general which in turn has shaped the way money flows around the world, allowing for sustainable societal growth and prosperity.

After I passed the Bank of England I made a left turn on to Bartholomew Lane and I'm then greeted with the sight of my office building which used to be the Bank of Westminster back in the day. The office has beautiful architecture on the outside, and the inside is right on par with the rest of it. I haven't taken a good photo of the office on my own so I hope this Google Street View below does it justice. 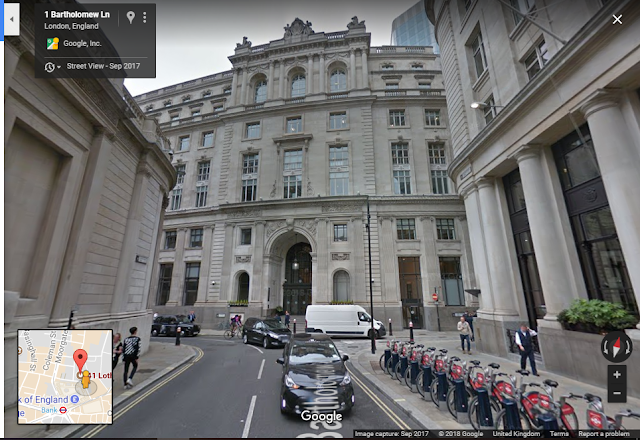 As soon as I got inside I was greeted by the office manager and we went through all the administrative processes and paperwork, then Nish and I were given our first assignment of working on their new website which of course wasn't the sexiest assignment, but we were pleased we were doing work immediately. After a short time of work we were asked to join a meeting with some students from Cass Business School, which is the business school of the City University of London. The meeting started with our boss, Michael Mainelli, giving a brief, yet insightful lecture on the history of the City of London. The City of London actually differs from London the city. The City of London is a square mile within London which dates back to around 40 AD and constitutes most of the original Roman settlements. After listening to some more interesting history about the city, Michael then spoke about Z/Yen and their history and how they've come to be what they are today.

After the meeting it was time to actually get back to work. The staff acknowledged that the current work we were doing wasn't extremely interesting, so Nish and I agreed to stay a couple extra hours each day to make sure we were ahead of schedule to finish our assignments in order to be able to move on to something more interesting. A couple days in and we were moving at a really good pace so we were then given an additional assignment to do research for one of the directors of the Distributed Futures project. Distributed Futures is an open source research program for Smart Ledgers and new technologies, so this is very exciting work in my opinion. If we prove competence on this research assignment I believe it will open more windows of opportunities for us each to be able to leave a lasting impact with this company.

As far as work is concerned, I could not be more excited for these next twelve weeks. Working at a firm with such a friendly staff and people who are willing to help you better yourself is all I could ask for. To top it all off, Michael, the CEO and Chairman of the company, is also a professor so Nish and I will certainly enjoy picking his mind with our curious queries across many fields.

I am looking forward to what lies ahead for me here in London. I had so many great opportunities just in my first week such as being able to attend a Brexit Panel discussion at Birkbeck college which was chaired by Michael, and also Nish & I were able to sit in on the common council meeting for the City of London where Michael is an alderman (a co-opted member of an English county or borough council, next in status to the Mayor). I sense there are many more great experiences that lie ahead and I'll be sure to document them here.


Nothing is certain in London but expense. -William Shenstone